You know those dinners that simmer for hours and make the whole house smell amazing? The ones that cause people to say "What are you cooking?!" the second they walk in the door? This slow cooker ham, green beans and potatoes recipe is one of those.

I grew up near the heart of Pennsylvania Dutch country, where this creatively named recipe (I dare you to guess what's in it!) was a mainstay. Ham, green beans, and potatoes (or as I lovingly refer to it—HGP) was one of my favorite childhood meals. Any time I'd come home from school to smell it wafting through the house, I felt like all was well with the world.

It wasn't until I headed west that I realized this gem of a dish is not a staple in every part of the country. To help correct that, I am sharing this simple and delicious meal with you all. This could not be any easier to make, and I promise your family will love you when you serve it, especially when the weather starts to cool down in the coming months.

This easy one-pot recipe cooks up in one big crockpot (or soup pot), and it only requires three ingredients. The title pretty much gives it away, right?

That's it! You'd never guess there were so few ingredients given the amazingly salty, smoky, hammy flavor of the broth; but the flavor is simply the result of the ham hocks cooking low and slow in water.

The trickiest part about making this recipe is finding the right kind of ham hock.

What is a ham hock?

A ham hock comes from the lower leg of a pig. There's not a lot of meat on a ham hock, but this portion of a pig lends a distinct "umami" flavor to anything it's cooked with, and creates a delicious broth when cooked low and slow in water.

Ideally you want to look for a meaty ham hock so that you can separate out a decent amount of meat to include in your dish. Good ham hocks should be readily available in farm-rich places (like Pennsylvania, where I grew up), but if you live in a really urban area they might be harder to come by.

I managed to find some good ham hock (boneless even!) at H.E.B. here in Houston, and I've had luck at other large grocery store chains as well. If you're having trouble finding a quality ham hock where you live, you can always ask a friendly butcher for some advice.

Another nice thing about ham hocks is that they're cheap! So if you find some, you should stock up and store any extras in the freezer.

I cook my ham, green beans, and potatoes in a slow cooker, so I wrote the recipe accordingly, but you can easily make this in a big soup pot or dutch oven on the stove as well. **Just note that if you do a stovetop variation, you'll want to cut the cooking time by about half since the stove simmering process takes less time.

As the recipe indicates, you don't want to add everything to the slow cooker at the same time because the ham hock takes longer to cook than the potatoes and green beans. So while this is an easy recipe, it's not a "set it and forget it" type of slow cooker meal.

I like to cook this meal over the course of two days.

DAY ONE: I slow cook the ham hocks all day to create the flavorful broth. Once the broth has cooled, I place it in the refrigerator over night. This way, the fat rises to the top of the broth and can be easily skimmed off and removed in the morning.

DAY TWO: I return the skimmed broth to the slow cooker and add the potatoes & green beans, along with the ham meat pulled from the bones. If you're in a hurry, you can do this part on the stovetop instead.

If you end up with a ham hock that doesn't have a lot of meat, you may want to add some additional ham. Purchase a ham steak, cube it up, and add it to the slow cooker at the end of the cooking process. Since it's already cooked, it just needs to be warmed up in the broth before it's ready to eat. 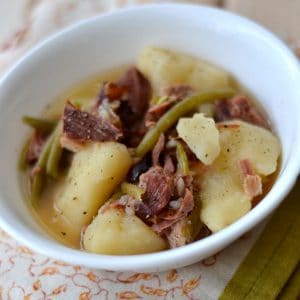 Cubed ham steak or additional ham can be added after the cooking process if your ham hocks are not very meaty.

My southern husband brought this dish with him. We use ham shank, a lot more meat on the bone. Onions and garlic are always included, canned green beans work just fine since he no longer gardens. Favorite meal! It's fun to see all the different versions. We are in Iowa, I think it's common here.

I love this meal and make it also I am from Pennsylvania, but I find it funny that you say Ham Hocks are cheap Where I live they are very expensive for how much meat that you get off of them

Exactly how much water should be added to the crock pot? I covered the ham hocks with water but it seems like a lot of broth.

My guess is boiled dinner....The ham, potatoes and green beans is much like my PA Dutch Mom made..but hers had ham with the bone, potatoes, carrots, cabbage and sometimes turnips..Yum

Oh man, this is definitely a Pennsylvania Dutch comfort food from way back. You need some bread and butter to sop up the juice too.