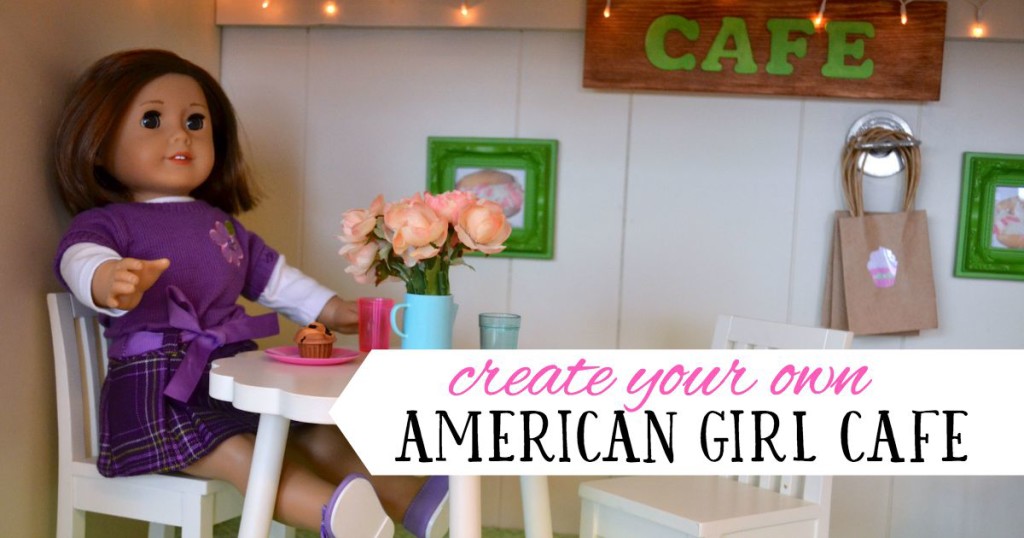 My daughters have been into American Girl dolls for at least fourÂ years now, and while there are definitely times I roll my eyes at the over-the-top nature of someÂ of the accessories and furniture that AG sells,Â overall I'm a big fan. Not only doÂ the dolls and accessoriesÂ encourage creative and imaginative play, but theÂ AGÂ books and movies have positive messages, and teach history as well.Â AndÂ let's face it...the miniature doll stuff is just really darn cute.

While we haveÂ a decent amount of official American Girl merchandise at our house,Â we also have lots of thingsÂ from less expensiveÂ brands (such as Target's "Our Generation"), as well asÂ things that weren't intended for an 18" doll at all, but just happen to be the right size (like the tiny bottles of tabasco sauce we scored during a hotel brunch). With a little creativity, you can find or make all kinds of fun things for your dolls that cost a fraction of what things cost at the AG store.

Which leads me to this fun little project...

Make Your Own American Girl Bakery

We just so happen to live about 10Â minutes away from anÂ American Girl store, which means a lot of "browsing" inevitably happens whenever we find ourselves at the mall. My daughter received the Grace doll for a gift last year, and she's been oohing and aahing over all of Grace's accessories, notably her French Bakery, which retailed for $500 before it was discontinued.

I kindly explained to her that there was absolutely no way she would be getting that bakery, to which she replied that ifÂ Santa brought it, it would be free. I then made up something super profound about how Santa couldn't bring that to her becauseÂ it would be too fragile to transport on his sleigh.Â (This Santa thing gets a whole lot trickier as the kids get older.)

Anyway, as I'd stood there looking at the bakery, the smallÂ crafty voice that occasionally pops into my head spoke up: I bet you could make a version of that.

I knew we already had a dollÂ table and chairs, as well as some doll bakedÂ goods from Target. The only issue was finding the spaceÂ to create the bakery itself. At first I thought of using a large box, but then as I was working on cleaning out some cabinets in our house, the idea dawned on me...what if we transformed this hardly-usedÂ cabinet into an American Girl bakery? 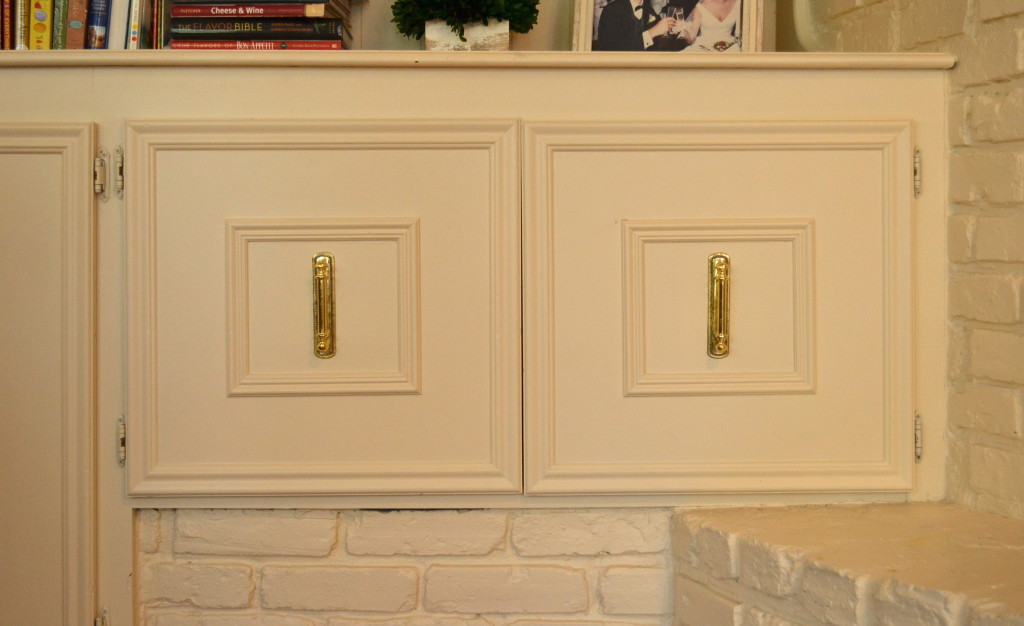 It was the perfect size, ANDÂ it would mean that the bakery and all of the things in it would beÂ contained behind a closed door instead of taking up valuable floor space in our house. Win!

The girls were super excited about this idea, and so weÂ headed out to check out Hobby Lobby, Michaels and Jo-Ann for inspiration. A few hours and $40 later,Â we'd turned this: 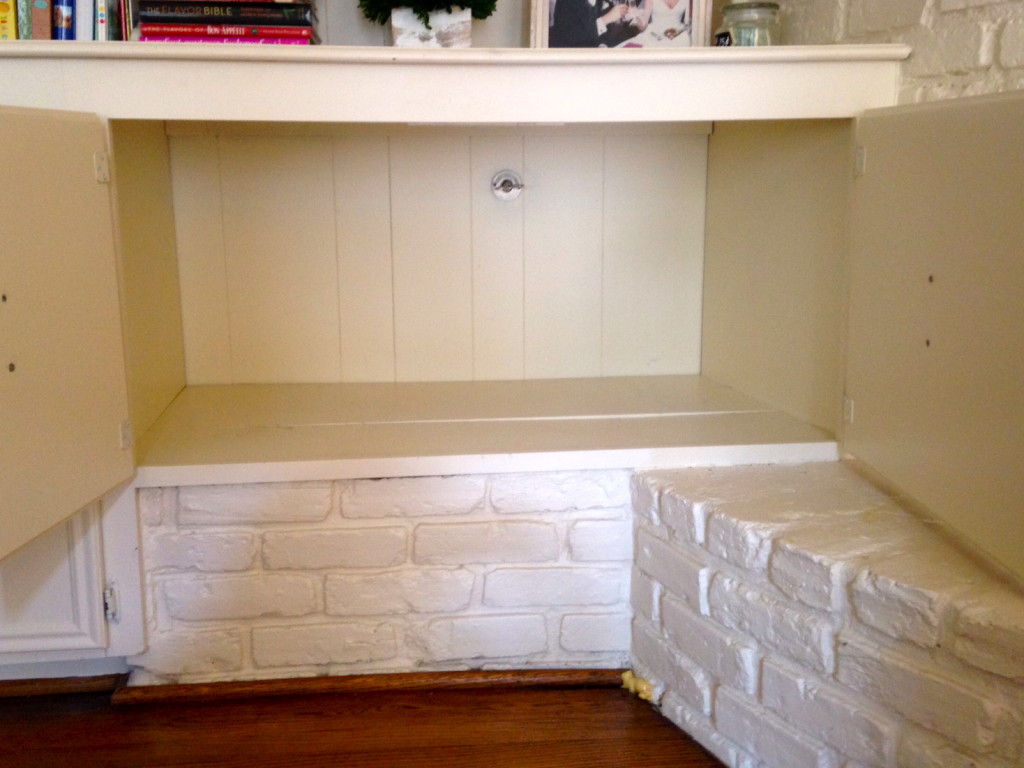 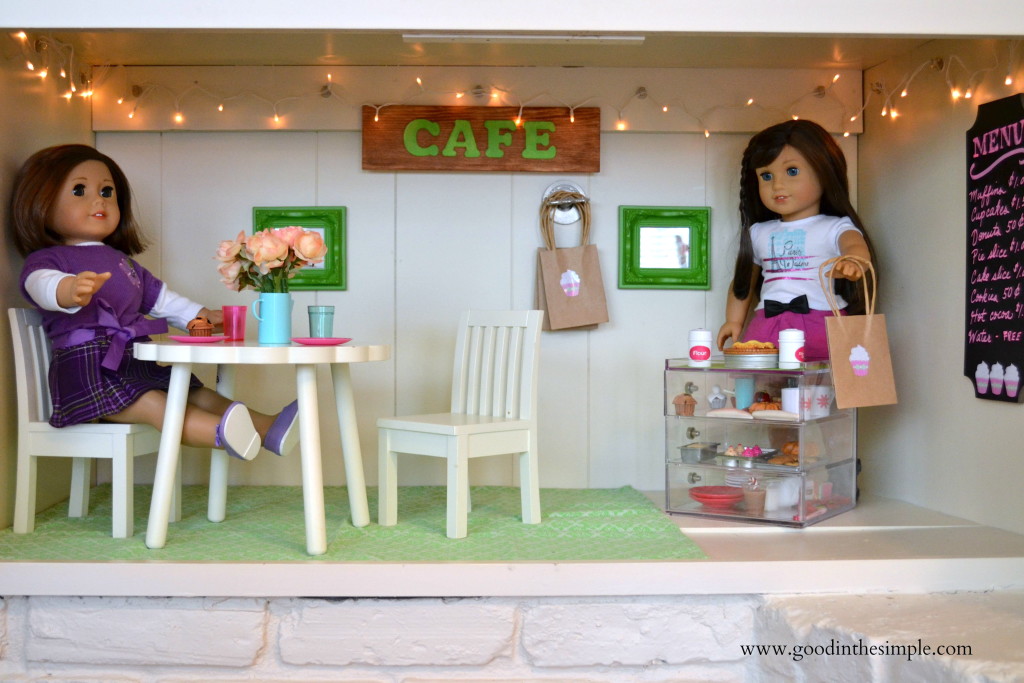 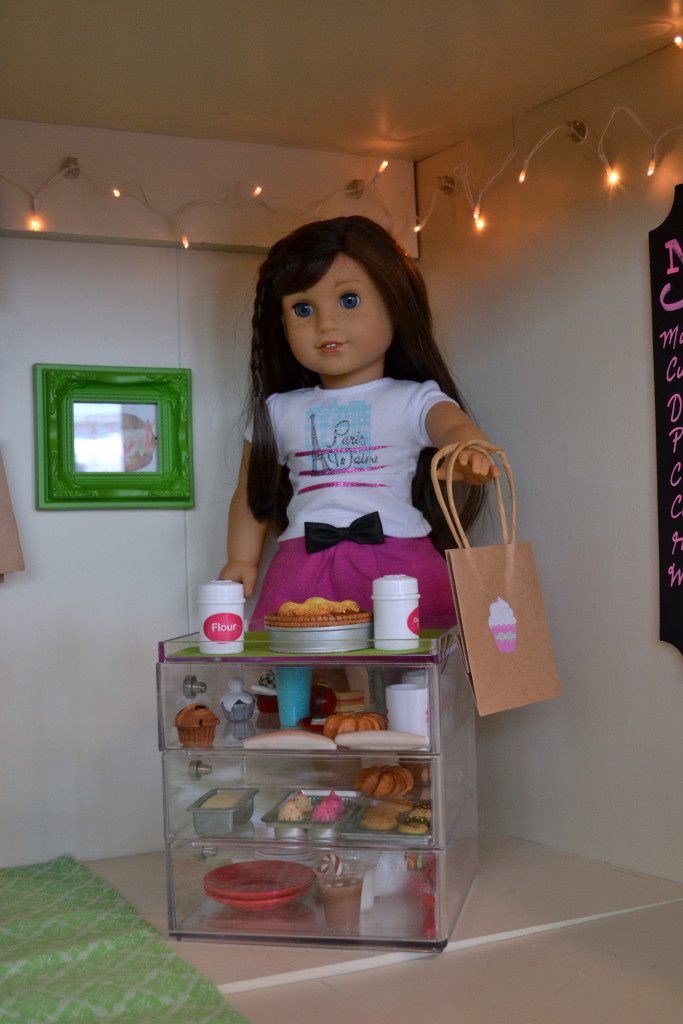 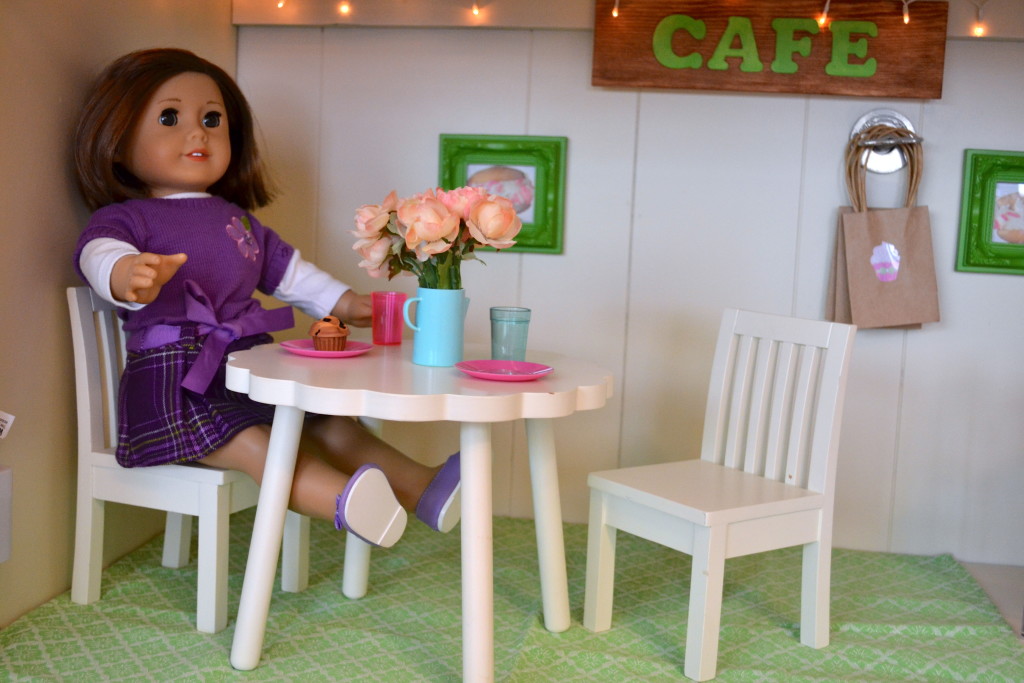 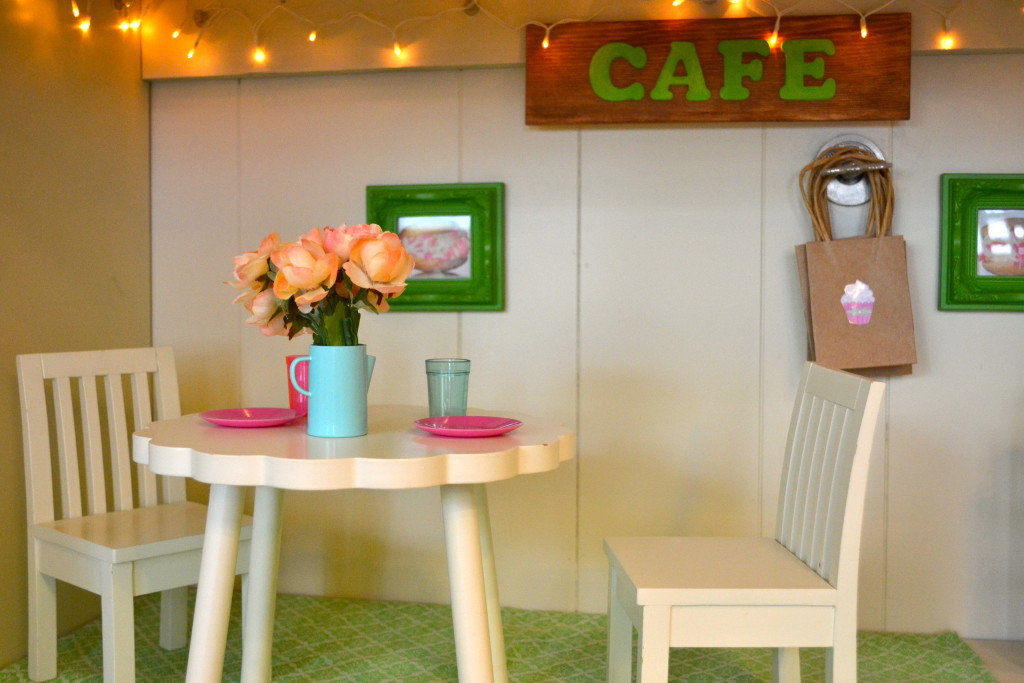 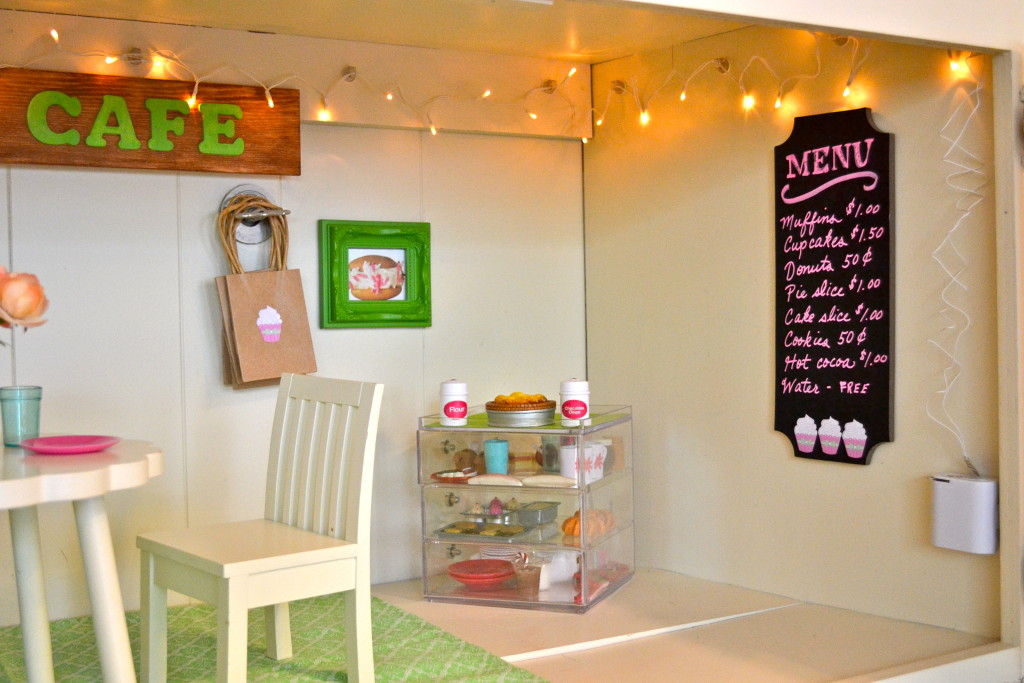 Isn't it cute? I totally want to hang out in there.

I won't bore you with every single detail of what we bought/used (although if there's anything specific you want to know, just ask in the comments and I'll happily answer), but here are some of the details:

Table & chairs:Â We bought these years ago from Pottery Barn kids, and they still sell a similar version.Â (You can also probably find a cheaper version elsewhere.)

Framed art: We found these mini green locker frames at Hobby Lobby for $1.99. We just cut out a photo of a pastry from a magazine to put inside. Michaels also had a huge display of mini frames. 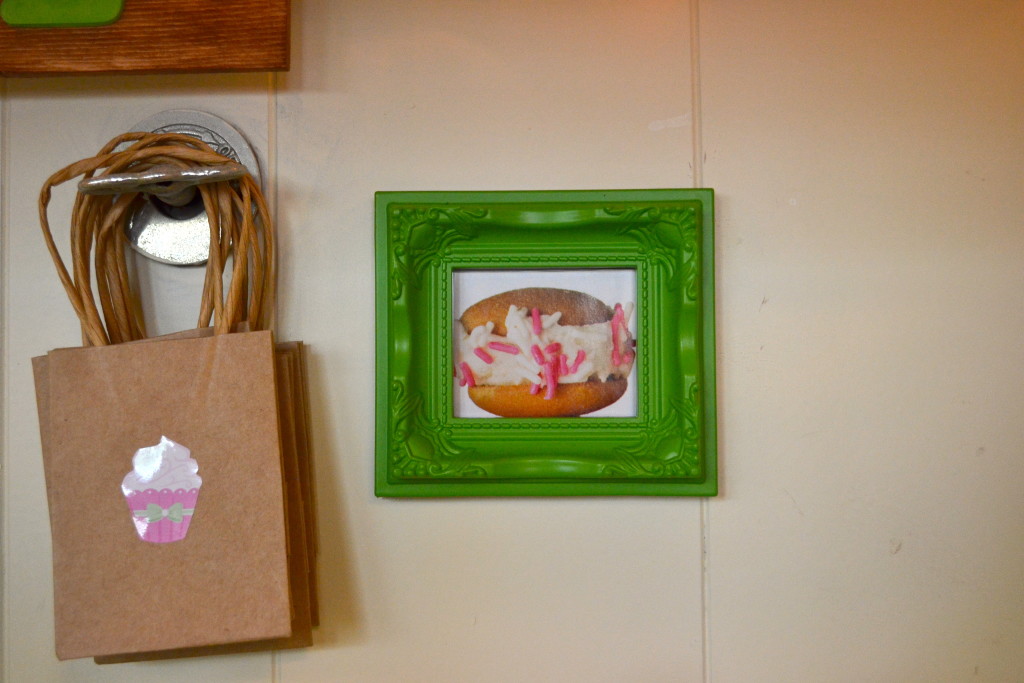 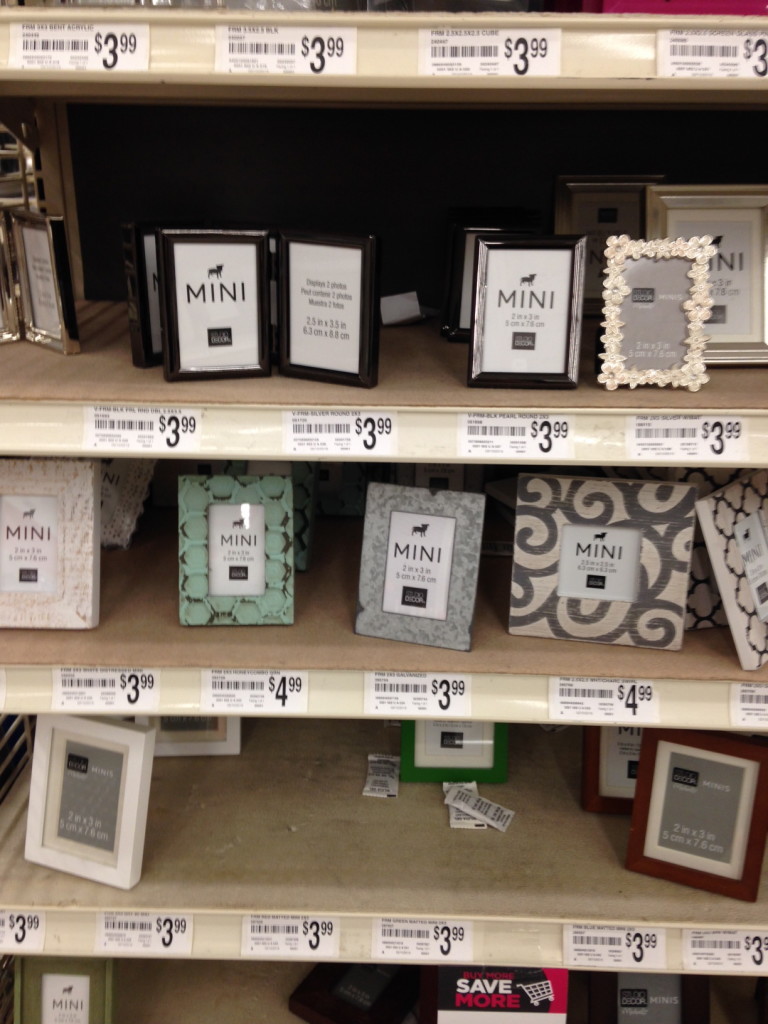 "To go" bags: We picked these up at Hobby Lobby, along with the cupcake stickers to decorate them with. They're super cute, and they also helped to disguise the non-functional fireplace knob that's sticking out of the cabinet.

Menu: This chalkboard came from Hobby Lobby. I used a pink chalkboard pen to write the menu items on it. I also saw a ton of small chalkboards for sale at Michaels after we'd already bought this one. 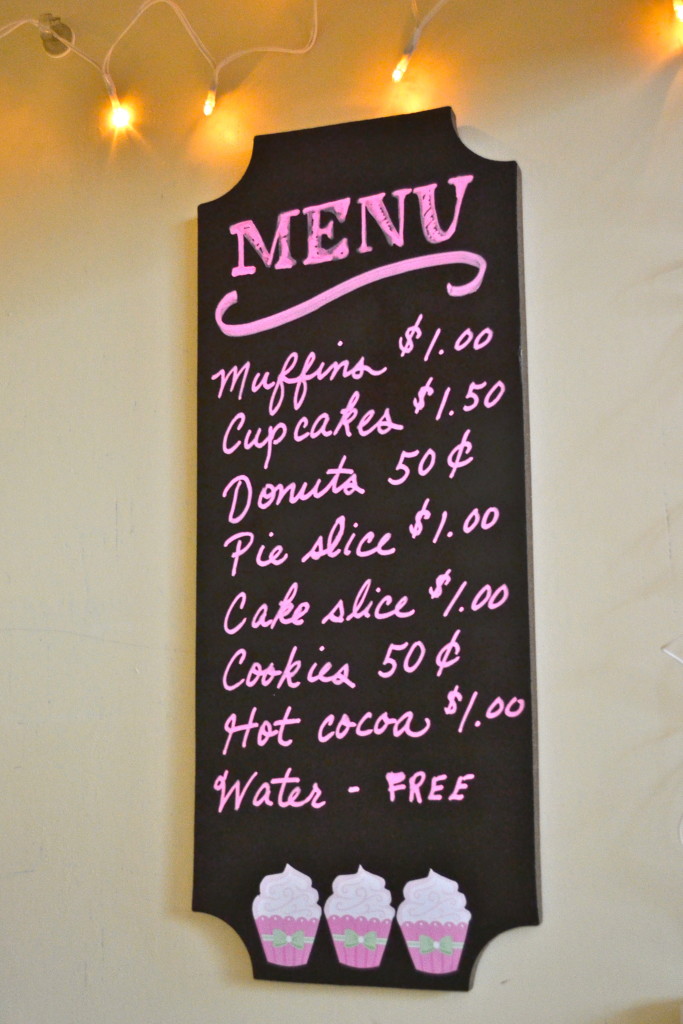 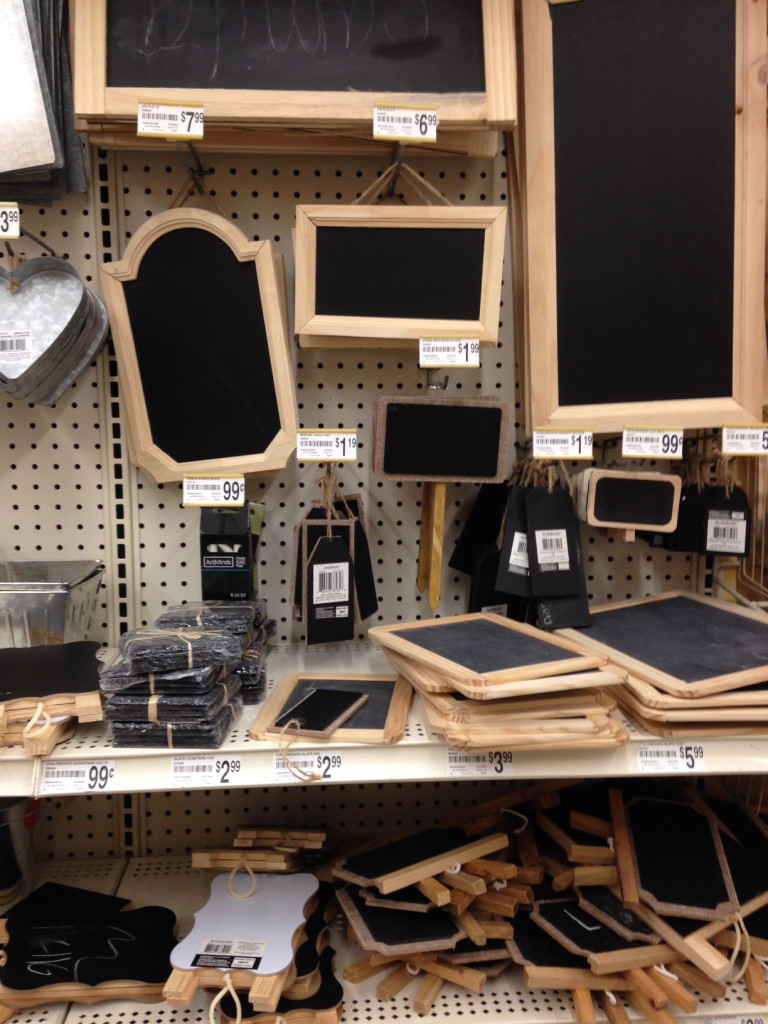 Cafe sign:Â We made this from a small wood plank and letters, all of which we got at Hobby Lobby. 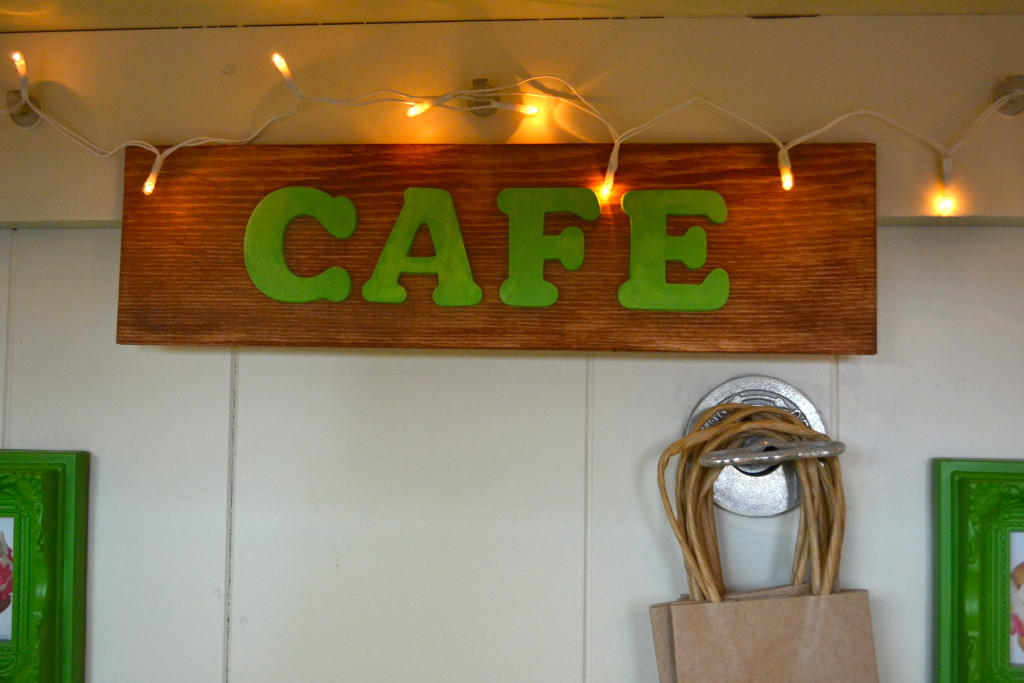 Lights: This is my favorite part of the cafe! We found these mini lights at Jo-Ann Fabrics. They run on batteries so you don't need to rely on an outlet.

You don't need to be an American Girl fan to do this type of project. The possibilities are endless! You could create aÂ room for any type of doll, an action figure/ninja hangout, or any other sort of space depending on the size of your cabinets and the interests of your kids.

If you're not sure what to put in it, just wander through the aisles of any craft store and you'll discover all sorts of thingsÂ you'd never even considered.

If you enjoyed this post, be sure to check out my MOST RECENT POSTS or these other related posts: 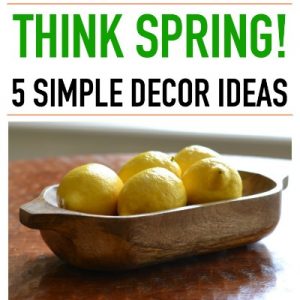 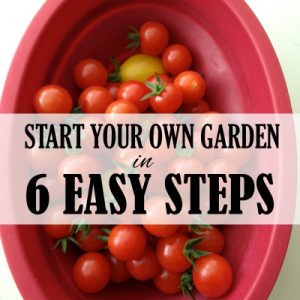 How to Start Your Own Garden in 6 Easy Steps 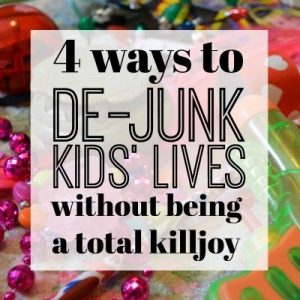 what a great idea! I love that you would do this for your girls. When I was 6, my parents got me a Holly Hobby house for Christmas equipped with a kitchen and coal fired oven with a loaf pan AND a loaf of bread in it. Needless to say I adored it which is maybe why this city girl is in love with baking and the country life. So kudos to you as a cool mommy! xoxo

This is SO adorable!! I wish I had had this to play with back when I was younger.. I loved my American Girl dolls but never bought any of their accessories because they were so crazy expensive!!

This is such a terrific idea. I think your daughters also learned a fantastic lesson from you along the way: They have the power to make their dreams come true! It just takes thought, creativity, and demonstrated action. And the satisfaction it brings from doing something themselves: Priceless.

Thank you so much, Denay! I didn't even think about that aspect of DIY, but it's very true.

OH MY GOSH! This is adorable! you are such a good mommy! Now I just need to have a girl so I can copy this someday :)