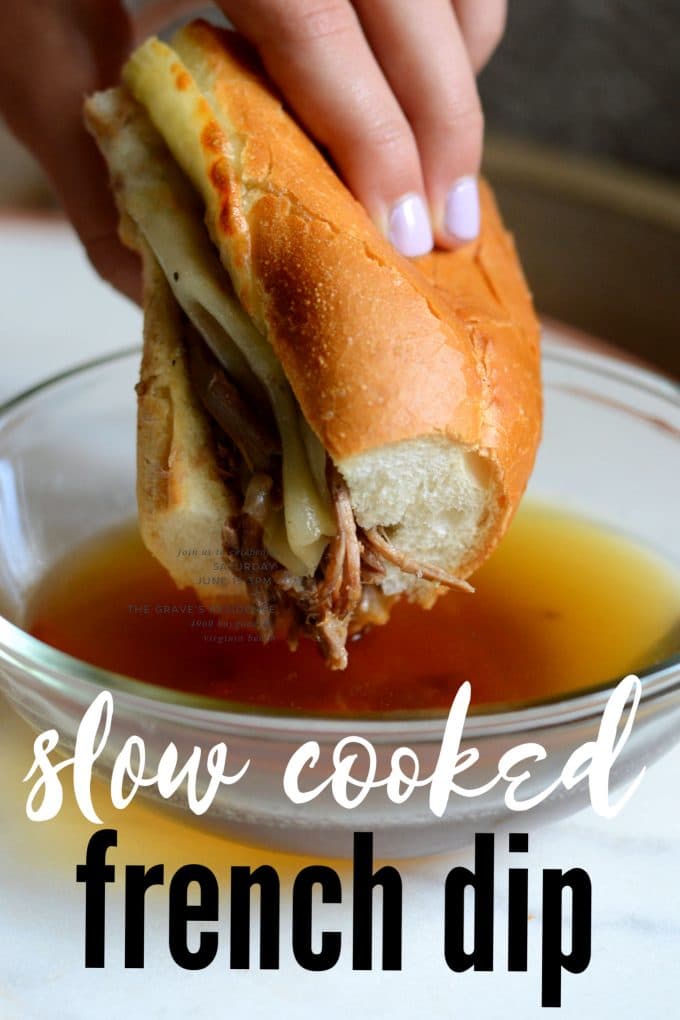 This easy slow cooker French Dip sandwich is made with beef bottom round (rump roast) and homemade aus jus. It's a super simple recipe to make for a family dinner or a party.

I was at a cozy Irish pub on a lazy Saturday afternoon (this was clearly pre-kids), taking in the dark wood, lively conversation, crowded booths, and Guinness signs.

I'd just been served a cold pint of ale, and needed something that would complement both the beer and the atmosphere. The French Dip sandwich with horseradish and aus jus called my name.

I still remember that first bite of the sandwich—the crusty bread submerged into the salty, beefy au jus was flavor and texture heaven.

After I found myself craving that French dip, I started checking out some of the popular French dip recipes online. Many of them either called for store-bought flavoring packets or had a few too many steps and ingredients for my liking.

Since I couldn't find exactly what I was looking for, I decided to create a recipe of my own.

The Key to a Great French Dip

The delicious aus jus flavor comes from the beef itself, so there is no need to get all crazy with a bunch of extra ingredients or seasoning packets.

In addition, you don't need to sear the beef. Just add it to the slow cooker, pour in the broth and spices, and walk away.

This recipe is not only perfect for a busy weeknight, but also for feeding a crowd. It's a great alternative to hotdogs and hamburgers when you're looking for an easy meal for guests that doesn't require a lot of work.

When you're ready to eat, simply strain the aus jus, shred the beef, and give the bread a few minutes under the broiler (along with some cheese, if you like). In my opinion, horseradish is also a must, but I'll leave that option up to you.

What Type of Meat to Use in a French Dip?

In my French Dip research, I came across a few different suggestions for what type of beef cut to use. I went with rump roast (sometimes called bottom round) because that's what they had at my store. That cut of meat doesn't exactly sound appetizing, but it was perfect for this recipe!

Best Bread for a French Dip

Like any good sandwich, the bread is going to be key. Look for a sub roll (or bollillo as they're called here in Texas) with a crunchy exterior and a soft middle.

For best results, place the sliced roll under the broiler to add some crispiness.

Best Cheese for a French Dip

There are a variety of cheeses you can add to this sandwich, but my personal favorite is provolone. It melts nicely, but the mild flavor doesn't interfere with the beefy taste of the sandwich and the au jus. 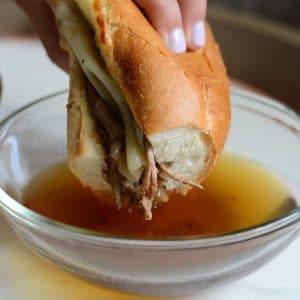 My husband is not a fan of the "standard pot roast dinner" and we had a rump roast in the deep freeze. I told him to find a recipe for it, and this is the one he found. Kudos to him for finding it and so glad he did! Simple, and easy, and I had everything needed on hand (minus the celery salt). Definitely will be one that we will make again and give me a reason to buy more roasts!

Thanks so much for your comment! I'm so glad you enjoyed it!!

What a flavorful, delicious and tempting recipe this is. A must try!

OMGee! comfort food at its finest! And that dipping jus, I could drink it! Going to make my next roast like this just to make these amazing looking sammiches!

I'm drooling over these sandwiches. I can't believe how easy they are to make.