Whether you're a new parent who wants to start out on the right foot, or a frustrated parent of picky eaters, hopefully this advice will help you to navigate the tricky world of feeding your kids well without power struggles. 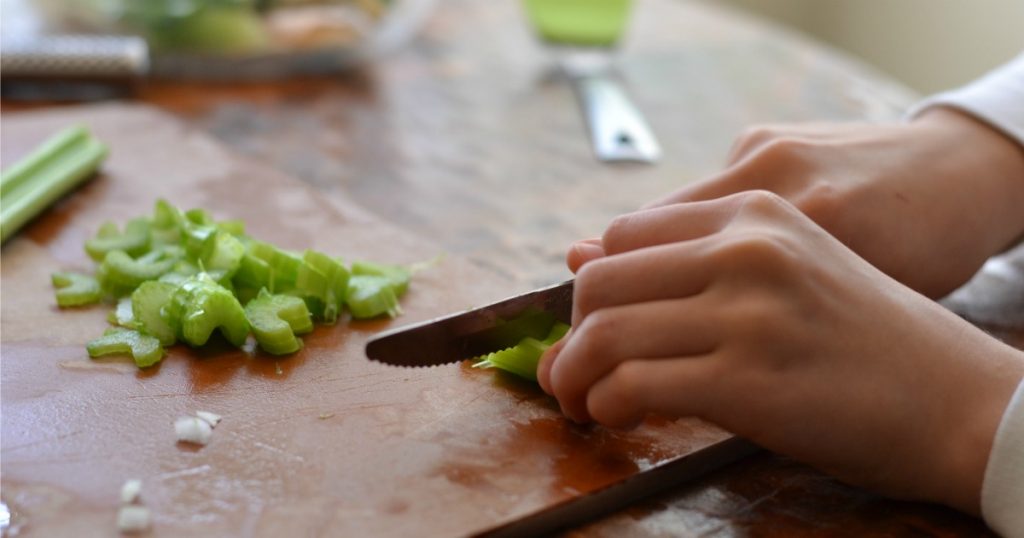 I have been wanting to write a post about this topic for ages, but I've hesitated because I don't want to come off as "Obnoxious Foodie Mom." Obnoxious Foodie Mom says things like: "I can't believe your child won't eat anything but buttered noodles! My darlings just consumed an entire plate of swiss chard, farro, roasted turnips and steamed halibut, and then asked for seconds!"

So let's get this straight right off the bat: I would never say something like that, nor would I think it, and I promise my kids wouldn't even go near the aforementioned dinner. I also completely understand that a lot of kids are picky eaters despite their parents' best efforts.

That said, my kids are fairly adventurous when it comes to food, and I often get asked about what I did or didn't do to develop their eating habits. I figured since this is a topic that a lot of parents want to know about, my advice is worth sharing. I can't guarantee that these tips will work for every child or every situation, but I believe these are all things that have contributed toward my girls becoming good eaters who enjoy a wide range of foods and are willing to try new things without a power struggle.

That last part is key. At the end of the day, it's not worth a nightly battle to get your kids to eat a spoonful of peas. Keep things lighthearted, and make sure your kids understand that good food is a source of nourishment and enjoyment, and should never be viewed as a punishment.

How to Avoid Raising Picky Eaters:

1) Don't give your kids pre-conceived notions of what tastes "good" and "bad."

As adults, we have pretty strong and firmly set opinions about what foods we like and dislike, and it can be easy to forget that young kids do not yet have those associations. Don't assume that just because you hate seafood and mushrooms that your child will hate those things, too. To a toddler, a carrot might be the most delicious thing on the planet and a cookie might taste gross.

Try to expose your kids to as many foods as possible from the earliest age possible, despite what you personally think about those foods. If you don't want to spend time or money making foods you don't like yourself, then take advantage of restaurants, friends' or relatives' houses, or grocery store hot food/salad bars where you can just buy a small portion of a prepared food to test the waters.

Also avoid giving a commentary about foods by either overselling or underselling what you're serving, ie: "This is SO delicious!! You're going to love it!!" or "You're probably going to hate this, but at least give it a try." When offering your child something new or something he/she hasn't liked in the past, silence is golden. 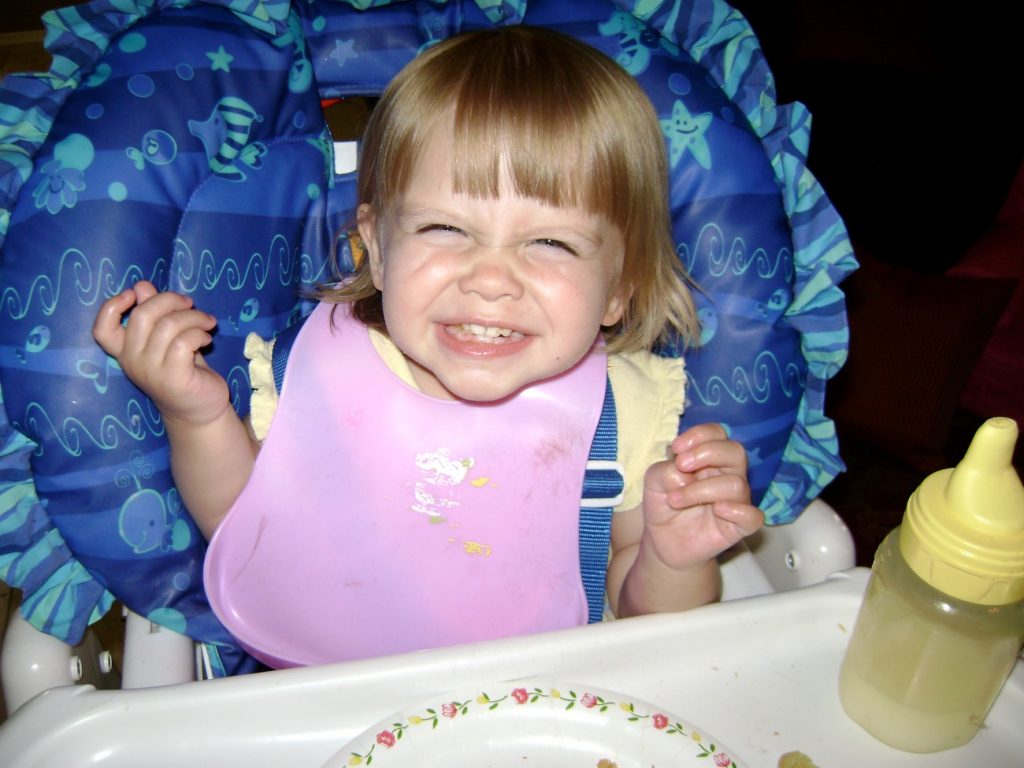 When I was a kid, there were lots of foods I didn't think I liked because I'd only ever had them prepared in one specific way. Yet, when I later tried those same foods cooked with a different technique or seasoned differently, I was surprised to realize that I actually loved them.

Brussels sprouts are a good example for me personally. Boiled brussels sprouts = blech (in my humble opinion); brussels sprouts salad with bacon = YUM. I also dislike sweet potatoes in a casserole or in baked form, yet I've had them in a stew or thinly sliced and roasted with olive oil, salt and pepper, and they tasted fantastic.

If your child tries something once and hates it, don't write off that food forever. Experiment with different cooking methods, different marinades/sauces, and different combinations. For instance, my kids love my salmon patties, but they don't always like salmon when it's served in filet form.

When in doubt, chop! There can be a big difference in how a food is received when it's a small part of a larger dish versus served on its own (for instance, beans in a soup vs. a big scoop of beans on a plate).

You can also play around with adding new or previously disliked foods to something that's already a favorite. My girls are HUGE pasta-lovers, so I know I can add just about anything to a pasta dish and they will gobble it up. You could add some new meats or veggies to pizza, a quesadilla, or any other favorite and it's likely to be much more well-received than if it were served solo.

We all have memories of being served a giant plate of something stinky and gross, and pushing the food around our plates with a fork while praying that mealtime would end. That situation is almost always going to end poorly: either the kid will have to leave the table without eating, or mom or dad will cave in and offer an alternative, like a bowl of cereal or a PB & J.

Instead of experimenting with an entirely new dish, I often like to use a 2/3 ratio when making dinner. That means that approximately 2/3 of the food on the plate are things I know the girls will eat, and the other 1/3 is something that they may or may not eat. It takes the pressure off of me and the kids because even if the kids don't want to eat more than one bite of the "new" food, they will still have plenty to eat and we won't get stuck in a battle of wills. Nor will I feel obligated to make them a substitute dinner just to get something in their stomachs.

As an example, the other night I served pork tenderloin, potatoes, and a kale salad. One daughter was a fan of the kale salad; the other was not. But at least they had the chance to try it without any pressure, and there were other good things on the plate to fill them up. 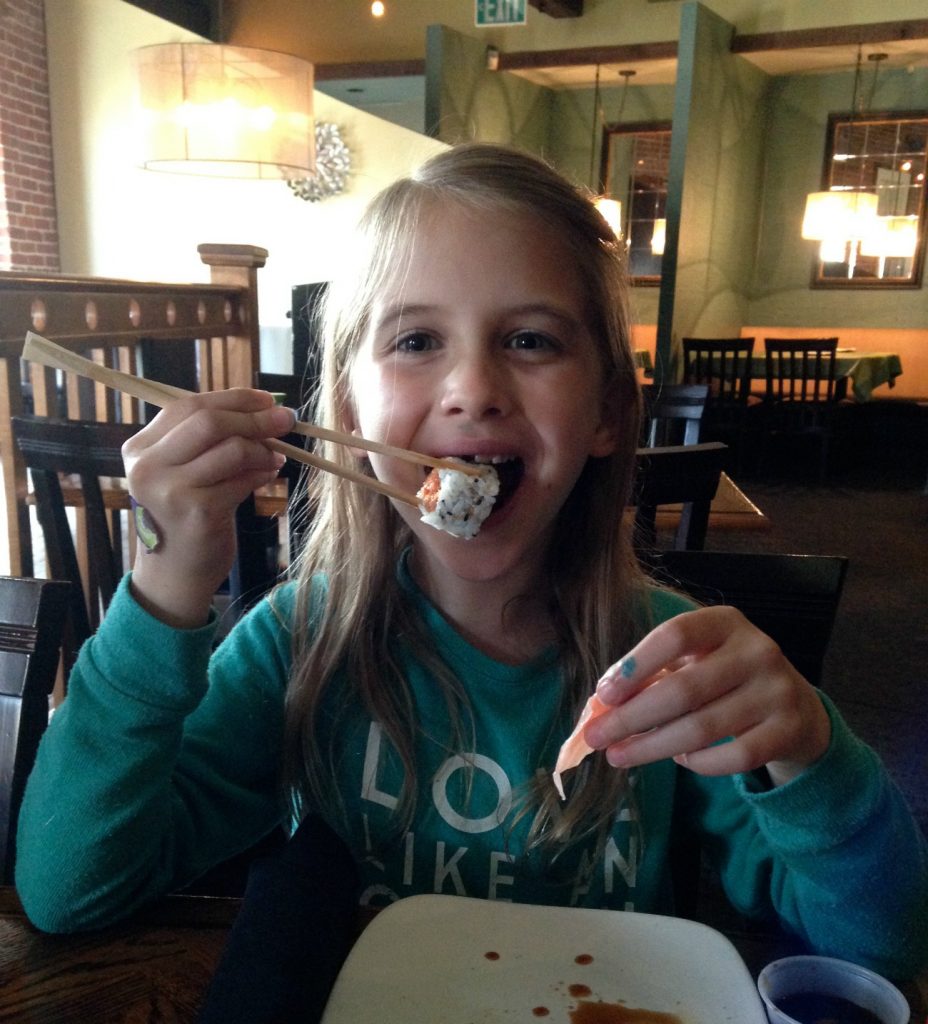 Now that I've developed an arsenal of "home run" family dinners that I know my kids will eat, it's tempting to keep making those over and over again. I know I won't have to put up with any whining or food being pushed around the plate. BUT... if I keep making our family favorites, I also know that my girls won't be encouraged to try anything new, and eventually they'll become less open-minded about trying new things.

By no means should you feel obligated to serve something new constantly, but aim to mix things up once a week or so, so that your children remember that a world of food exists beyond spaghetti and meatballs.

5) Get your kids involved in the kitchen

It's absolutely true that when kids are involved in the cooking process, they are more willing to try new things. I've watched my girls gleefully chow down a vegetable minestrone that they made themselves, and I know if I'd made it and served it to them, they would have been a lot less enthusiastic.

To further enhance their cooking skills, I signed my girls up for Katie Kimball's Kids Cook Real Food eCourse, which is an online, self-paced course that's designed to teach kids of all ages a wide range of age-appropriate kitchen skills that will serve them well for life.

Katie's course showed me that my girls are capable of doing a LOT more in the kitchen than I previously give them credit for. Improving their cooking skills is a win-win for all of us — I get a lot of valuable help making meals, and they get a feeling of accomplishment. They love saying, "I made this all by myself!" and they're always willing to eat, or at least try, the foods that they prepared.

If you'd prefer to do a class in person, look for kids' cooking camps during the summer, or cooking classes for kids offered at stores like Williams Sonoma or Sur la Table.

6) Stay Positive and Try Not to Label

I'm guilty of it myself...even though both of my girls are adventurous eaters, one is slightly pickier than the other, and I sometimes point it out in times of frustration. But it's not a good thing. When you label your kid as being picky, he/she will start to just accept that it's true and be even less willing to try new things.

Oftentimes being a picky eater is just a phase. I was a pretty picky kid throughout various stages of my life (just ask my mom about the year I wouldn't eat anything but bagels). :( But I grew to have a genuine love for all kinds of nutritious foods and just about every cuisine that exists.

Just keep exposing your kids to all of the wonderful and unique foods that exist in the world, read about food together, and have fun experimenting in the kitchen. It might take a while to pay off, but that's true of just about all aspects of parenting! Don't stress yourself out or feel like a bad parent if you're not succeeding...just stay positive and do the best that you can.

If you guys have any advice to add about picky eaters, stories to share, or picky eating frustrations to vent, please do so in the comments!

I love this! Excellent points! :)

Wonderful advice and I can fully attest that they are great eaters?

Yes you can...I know they've eaten you out of house and home on several occasions!!! :)

Love this blog, Lyss. Remember when you wouldn't eat lobster ? We saved a lot of money on you when we went to Maine! I hope I didn't serve you too many stinky and gross meals when you were growing up. If I did, I'm sorry...?