This easy fall cocktail made with pumpkin ale and Goldschlager captures the essence of autumn with the flavors of pumpkin and cinnamon.

Is it even possible to think about fall without immediately thinking of pumpkins?

By the time November rolls around, we might all be totally pumpkined out, but while fall flavors are still fresh and exciting, I have a fantastic, simple cocktail recipe to share: The Pumpkin Ale Fall Cocktail. Doesn't that have a nice ring to it?

There are only two ingredients required: Pumpkin ale and Goldschlager.

However, there's one caveat. In order for this drink to reach its full peak of awesomeness, you must do the cinnamon-sugar rim. I mean, I guess it's OK if you don't want to take the time, but I promise you will thank yourself if you do.

Here are just a few scenarios where the Pumpkin-Ale Cocktail would be the perfect beverage:

(That last one would be my most likely scenario.)

Just like my iced tea cocktail, this fall cocktail could not be any easier to make. Again, the cinnamon-sugar rim is totally optional, but I highly recommend it. It accentuates the sweet cinnamon-y ness of the Goldschlager and adds that little something special.

How to Make a Cinnamon Sugar Rim

To make the rim, you just put a ring of honey onto a plate, and fill a shallow bowl with a mixture of cinnamon and sugar. Dip the rim of a pint glass into the honey, and then into the cinnamon sugar.

After your glass is ready, pour in a shot of Goldschlager and top with some ice cold pumpkin ale. 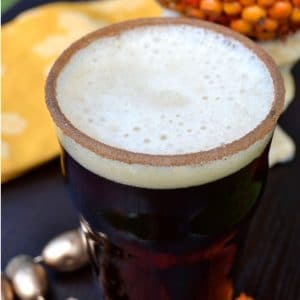 A perfect recipe to try this fall. Thanks for sharing.

Cathleen @ A Taste of Madness

This is so perfect for the fall. Also, I am so busy lately, that I am only making recipes with 10 ingredients or less to reduce my shopping list length. So this recipe is perfect for me ;)

Yum, this sounds absolutely delicious, thanks for the fun fall cocktail inspiration! :) And "Sitting on your living room couch, watching your 500th episode of House Hunters. "<--that will be me, hah!

Wow - so fun and seasonal! I loooove the way you've sugared the rim! Perfect for the season, and looks like you have all the scenarios covered ;)

This sounds like absolute heaven! I'm not allowed to have booze for another month or two for medical reasons, but I'll have to stock up on pumpkin ale in the meantime so that I can try this when it's safe again! Thank you for sharing.